The nutritive values of tropical fruits like coconut are of interest to consumers and useful for the breeding program. The two experiments were carried out in Completely Randomized Design with 3 replications. The first experiment aimed to determine the essential and non-essential amino acid content of liquid and solid endosperm of potential market varieties of coconut such as young tender nut of Aromatic Green Dwarf (Nam Hom) and mature nut of hybrid Nam Hom x Kathi (NHK). Among the 18 kinds of amino acids, the significant differences were found on Aspatic acid, Cystine, Serine, Isoleucine, and Phenylalanine content while highly significant differences were found on Histidine and Methionine content. The second experiment aimed to determine the fatty acid composition of virgin coconut oil of 20 coconut accessions from the coconut field gene bank of Thailand at Chumphon Horticultural Research Centre. The result showed that there were significant differences on the eight fatty acid compositions. Among the eight fatty acids, lauric acid is the most noted one by consumers and it was found that lauric acid content in virgin coconut oil (VCO) was excellent  (lauric acid > 48.8%) and the mean of lauric aicd content among the eight varieties had no significant difference at 5% level by DMRT. These varieties include including Renell Tall,  Chumphon Hybrid No. 2, Malayan Yellow Dwarf, Sawi Hybrid No.1 (MAWA), Hybrid Chumphon 60, Thai Red Dwarf, Sri Lanka Tall, and Hybrid Nam Hom x Kathi (NHK) with the lauric acid content at  51.0, 50.1, 49.3, 49.0, 49.0, 49.0, 48.9, and 48.8%, respectively. These varieties, therefore, were suitable for VCO processing since they have high lauric content. 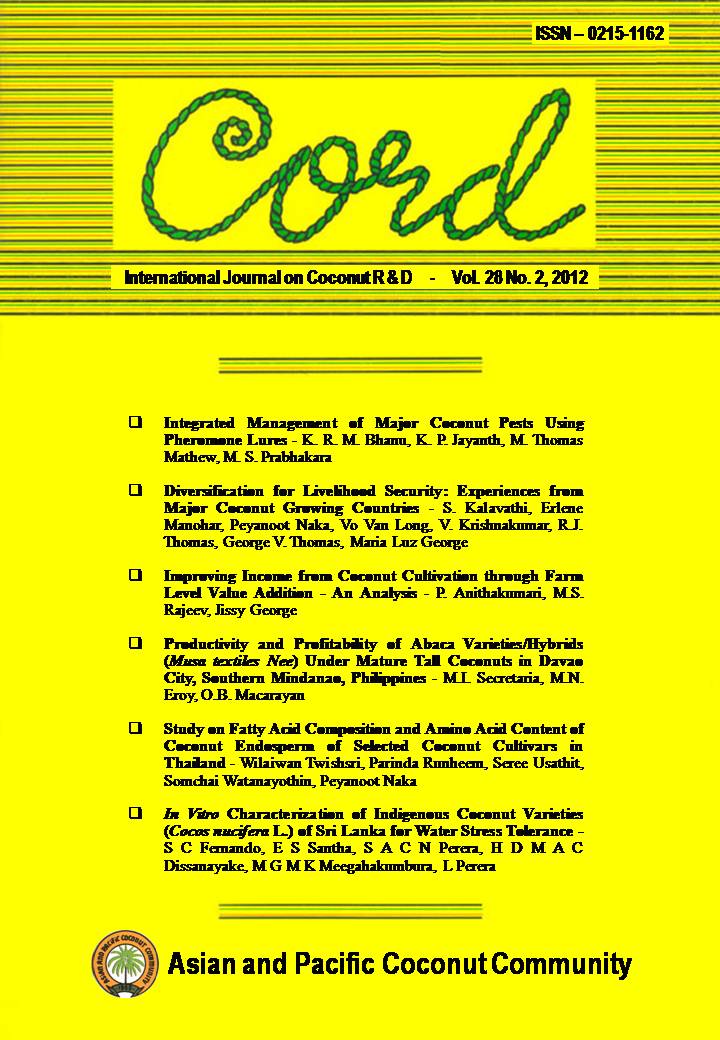