Curd coconut (CC) is a rare abnormality in the meat of the coconut which is thicker than normal and is fluffy and soft like curd. Being more delicious than normal coconut, CC is favored by people who eat it as dessert. In ten countries where CC occurs, its occurrence is at a very low frequency of about 0.15%. CC is produced on a normal-looking palm which bears mostly normal fruits except for a very few CC fruits. Such fruit does not germinate, thus cannot be used to propagate the character. The experienced growers germinate normal-looking fruits obtained from the CC-bearing palm, which may or may not yield CC fruits after 8 years of planting. A controlled self-pollination of the CC-bearing palm yield a 3:1 ratio of normal: CC fruits, indicating the mother palm is a heterozygote (Kk) for the CC character, which is recessive (kk). The CC endosperm (kkk) cannot produce the enzyme galacto-mannanse to digest galactomannan to produce mannan. Thus, it contains galacto-mannanase that is viscous, but is not digested as food of the CC embryo. Consequently, it eventually dies. Galactomannan is responsible for the fluffy texture of the CC. CC embryo can be cultured in aseptic condition. Upon growing this cultured embryo to fruit-bearing stage, CC fruits are produced 100% if self pollinated. A hybridization scheme has been conducted by the Thailand Horticultural Research Institute. Pollen sources were from embryo-cultured palms while maternal parents were found dwarf cultivars, namely ‘Nam Hom’, ‘Thung Khlet’, Malayan Yellow Dwarf’, and ‘Malayan Red Dwarf’. The F1 hybrids were mostly semi-dwarf in stature (that is selfing in nature); they all produced 25% CC fruits as expected. The most interesting cross was that with ‘Nam Hom’, in which 56% have aromatic water. It is postulated that if a backcross is made between semi-dwarf F1 with the CC homozygous (kk) embryo-cultured palms, the resultant offspring would yield 50% CC fruits which doubled that of the F2 which yield only 25% CC fruits. Not only CC fruits are delicious, they are also nutritious with higher amount of saturated and less unsaturated fatty acid than normal fruits. CC is always high on demand because people love to eat CC as dessert, even at the price ten times as much as ordinary coconut. CC growers earn 2.5 times as much compared to ordinary palms if they grow F1 hybrids, but will double that amount if they make backcross by using pollens from homozygous embryo-cultured palms (kk). 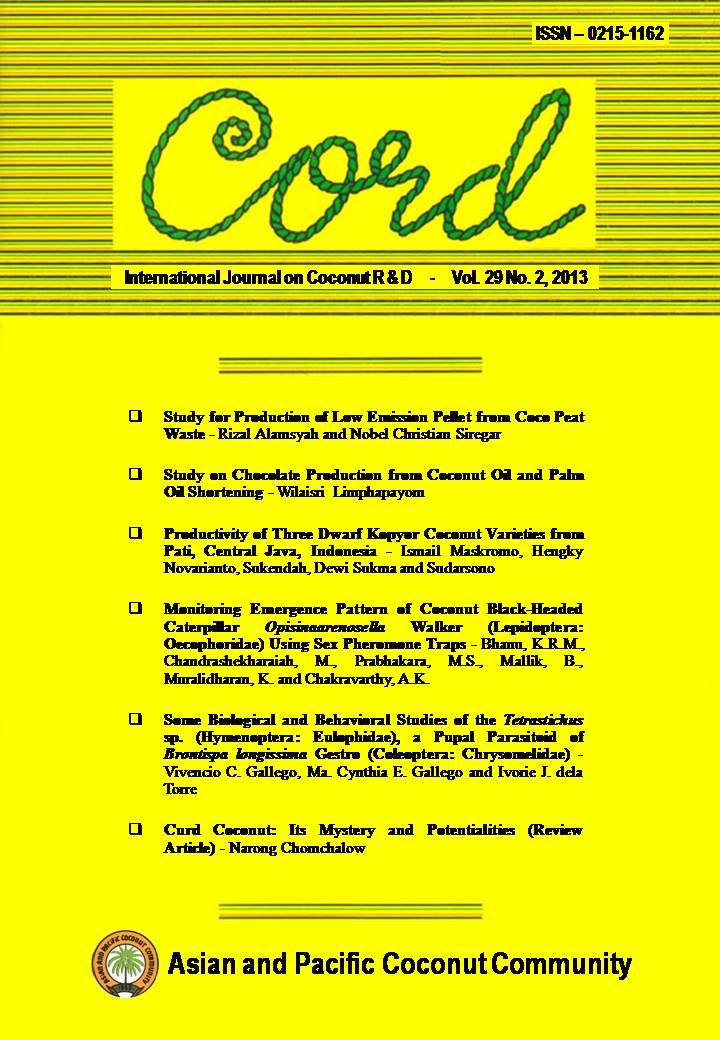